As a Christian Science organization, we are here to bring the healing message of the Christ.

Church services are tailored to individual institutions. Besides services, one-to-one discussions allow the inquirer to explore how the principles of Christian Science are applied to specific situations. Our message that God’s man is not a sinner heals guilt and speeds regeneration.

Our volunteers do not become involved in giving personal advice, financial assistance, nor do they aid in legal matters. The work is wholly on a spiritual basis. They may pray with a resident or refer the need for help to a participating practitioner. A Christian Science practitioner supports anyone seeking healing through prayer alone. 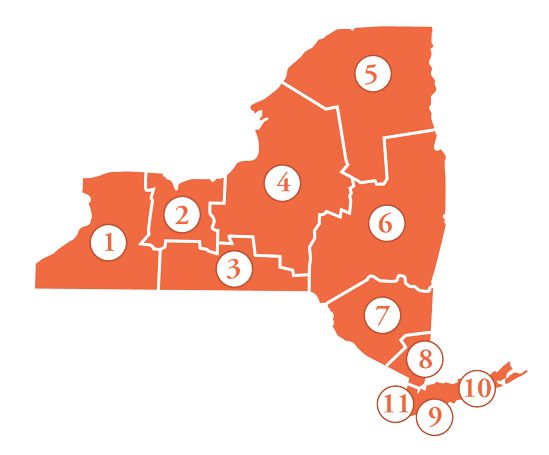 Support for this work

* The zone number corresponds to the numbers on the map

The State Committee meets two times a year in New York City or by telephone conferences that enable all zone chairs to participate in reviewing state activities and needs. Each zone also has periodic meetings for its representatives and volunteers. Zones select local institutions to be served and handle their own scheduling and day-to-day relations as appropriate.

Branch churches make pro rata contributions in support of the work, prepare literature for distribution, maintain space for books to be brought to facilities and sponsor Christian Science lectures in the facilities with help from the State Committee.

This work strengthens a branch church by enlarging the scope of the concept of “church” by answering the calls for help from a community which would not otherwise have access to the many avenues by which healing and regeneration are reached.

Our committee focuses on the reality of
perfect God and perfect man.

“Jesus beheld in Science the perfect man, who appeared to him where sinning mortal man appears to mortals. In this perfect man the Saviour saw God's own likeness, and this correct view of man healed the sick. Thus Jesus taught that the kingdom of God is intact, universal, and that man is pure and holy.”

Do you have a question about our services, or simply want to be in contact? Please fill out the form below.

Thank you! Your submission has been received!
Oops! Something went wrong while submitting the form.